This post may contain affiliate links and I may earn a small commission when you click on the links at no additional cost to you. As an Amazon Affiliate I earn from qualifying purchases. Thank you!

Who doesn’t like to attend a wedding? No one perhaps. With all the festive atmosphere, couples being in love with each other everywhere, delicious foods, grand cake, and good drinks — it wouldn’t be surprising that you would wish for the party not to end soon. Attending weddings will not just make you feel the love in the venue, but you will also get to witness different wedding traditions. One of these traditions is the “jumping the broom”.

What is a wedding broom?

A broom is an object used primarily in cleaning but can symbolize a lot of things depending on how and where it is used. For the brooms used in traditional wedding ceremonies, it holds spiritual and practical values. Women, specifically the wives, will use the broom in maintaining the cleanliness and organization in their homes and family.

Spiritually speaking, the broom also symbolizes as an object that will sweep the bad spirits and negative vibes away from the couple and the family that they are about to build. And since the couples both jump over the broom during their wedding, it means that the two individuals are equally determined and will work hand in hand in running their household.

What is the history of “Jumping The Broom”? 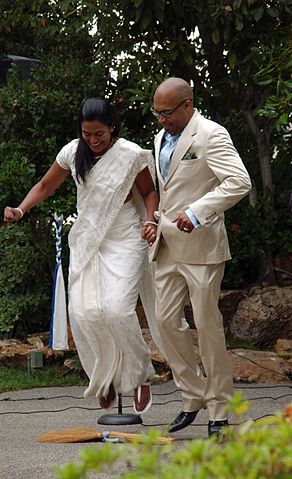 So, where does the wedding broom tradition come from? The tradition of “jumping the broom” is a wedding tradition practiced by many African Americans on their wedding. However, the practice of such tradition dates back as early as the 18th century in the West African country of Ghana. The country was then ruled by the Asante of Ashanti Confederacy who were very particular in keeping the urban areas and roads clean with the use of their locally made brooms.

The importance of brooms does not stop in cleaning their roads that it even made its way on their wedding ceremonies. Ashanti believed that the brooms will help the wedded couples to brush away evil spirits from their households. Their jumping will show how determined the couples are in keeping their relationship and in building their own family. Furthermore, whoever jumped the highest, which oftentimes are the men, will become the decision maker in their household.

The tradition of “jumping over a broom” has become a practice until the Emancipation in America and the fall of Ashanti Confederacy in Ghana in the year 1897. After this, British have dominated the country’s norms and traditions, and the “jumping the broom” tradition has slowly disappeared. However, slaves from Ghana who were brought to America have kept the tradition and continuously practiced it during their wedding ceremonies.

Over time, African ethnic groups, specially those who were victims of slavery, had picked up the tradition and applied it in their community with the belief that the ceremony will help strengthen the marriage among ethnic groups who didn’t have autonomy then.  During this time, slaves don’t have the power to make decisions for themselves. Couples and families can be separated easily, and were even forced to marry another slave, should their owners want it. The ceremony of “jumping over the broom” somehow gave hope to slaves with regards to their married life. This practice survived with the passing of years; and now, it has become part of wedding ceremonies in many African American couples.

What does “jumping over a broom” at a wedding mean for the bride and groom?

The broom in the tradition is a symbolism of marriage that binds the couple together and how they will face their new beginning or their life after being married. Since they are about to start their own family, the broom symbolizes how the couples should sweep away the past.

Moreover, the broom means the union of the two families and the respect that both couples give to each. Since it’s the woman who usually holds the broom, it also means that she will keep her household clean and organized. While the man, who usually happens to jump the highest, will be the one to lead his family.

The tradition of “jumping over a broom” in wedding ceremonies are done after the couples shared their vows and kiss as married and before they head back down the aisle.

While traditionally, only the married couples jumped over the broom; today, couples can choose to include their guests in the jumping tradition. After the couples have jumped on the broom and before the guests leave the church or the venue, they can jump over the broom. This means that their well-wishes and blessings will go with the married couples as they start their own family.

How are wedding brooms different from regular brooms?

During the ancient period where Asante of Ashanti Confederacy ruled Ghana, the tradition has a deeper context and more personal for both couples. The brooms used in the ceremonies were made of wooden handle and natural bristles; and were also the same brooms women used in cleaning the roads and their homes.

Today, the tradition has become somehow different because many households are no longer using brooms in cleaning their homes. Inventions such as vacuum cleaners and mops have replaced the traditional brooms. Somehow, the “jumping over a broom” has become a part of the family’s history and culture. However, the desire of couples to have a blessed marriage remains the same.

Is the broom decorated?

Nowadays, several modifications are made with the broom used in the tradition. The brides are now free to decorate and even make their own brooms for the ceremony. They can personalize it to match the wedding’s theme such as decorating it with ribbons, fresh garlands, beads, and so on. Brides can even write some verse on the handle of the broom.

As time evolves, so are the traditions and customs that we believe. Some variations were added to the traditional practices of “jumping over a broom” to make it more personalized. Nevertheless, the purpose of this tradition still remains —- to bind the newly wedded couple and to sweep away negative things along their journey.

FindABroom is a participant in the Amazon Services LLC Associates Program, an affiliate advertising program designed to provide a means for sites to earn advertising fees by advertising and linking to Amazon.com.